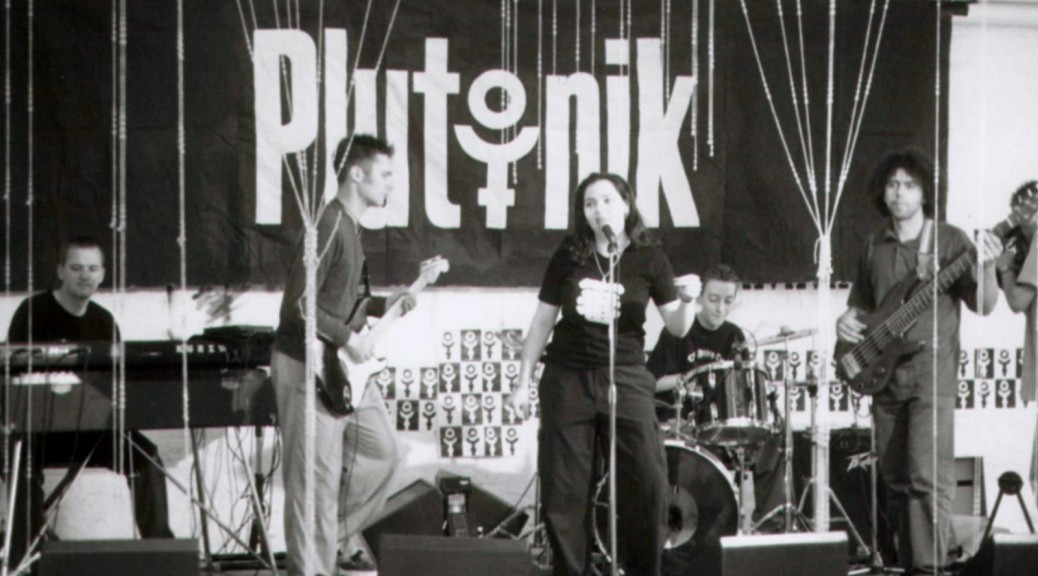 PLUTONIK – RONNIE SCOTTS’S : Drum and bass may seem an odd choice for the city’s Songwriters Festival, but Plutonik stole the show with a gutsy and awesome performance. Kicking off with their latest single ‘Londinium‘, they raged through a set including many of the songs off the new album ‘Prime Numbers‘. Combining the bittersweet lyrics of Chrissy Van Dyke with the enormous talent of the rest of the band, they won the audience over from the word go. The only dark spot on an otherwise immaculate performance was the lack of respect shown by a noisy and disinterested section of the audience during Chrissy’s solo number, the acoustic ‘Sister‘. All in all a top gig, despite the audience, and Plutonik are definitely one of the bands to look for in the very near future. ‘Prime Numbers‘ is out now on Integrity Records. Beg, borrow or buy a copy.
(EVENING MAIL – 16th AUGUST)

“PLUTONIK – CUSTARD FACTORY : If Portishead were dragged back five years to their melodic best, spruced up with smatterings of d’n’b and played by a five-piece band, you’d have Plutonik. This Birmingham trio – rounded out live by a rhythm section – are already being whispered about in excited tones. And with the release of Brit-flick “The Van Boys” featuring Plutonik’s debut on the soundtrack, the whispering will be getting a lot more vocal. Singer Chrissy Van Dyke introduces “Sitting on Top of the World” with the words, “This is our first single and it’s sold quite well.” The smoky atmospherics and killer tune are even stronger tonight. Live, they’re augmented by a 17-year-old drummer with the virtuosity of a veteran and a bassist from Seventies funk school – massive hair, comedy facial expressions and classic cocky demeanour. This is no ordinary band. Programmer Alan Rowe steps in on guitar duties, Jim Dunstan sprinkles acid jazz keyboards on the dark beats of “Rehab” and the lyrics tackle environmental issues, jealousy and betrayed trust with a melancholic bitterness. It’s all a bit too sombre on “Angel“, but that’s their only false move. By the time they’ve closed with “That’s Not All There Is“, we’re left with a warm glow wanting to hear more. We will.
(MELODY MAKER – 12th JUNE)

The prospect of seeing Birmingham breakbeat combo Plutonik play a truly live set intrigued me. Could these dance press darlings cut it in the real world ? The amount of gear on stage suggested they’d certainly give it a try. The hitherto studio-based three-piece was augmented by a live drummer and bassist – the former looked all of 12 years old and was pure genius, while the latter drew on every conceivable style, even bottleneck slide bass. With guitar, Rhodes piano and the soaring vocals of Chrissy Van Dyke, the overall effect was of Morcheeba meeting Skunk Anansie for a Jazz’n’bass workout. In the absence of last year’s debut, “Jungoltrane“, the biggest cheer went to the current single, “Sitting on Top of The World“. For me, though, the standout track was “Londinium“… driving bassline and gospel-like harmonies, this song could certainly give Catatonia’s recent tune of the same name a run for it’s money.
(MAKING MUSIC – JUNE ’99)

“They’ve had but two singles so far, not counting club smash ‘Jungoltrane‘, but that’s all it’s taken to convince that Plutonik are a serious prospekt – sorry, prospect. First single, ‘Sitting On Top of the World’ was a golden brown slice of drum ‘n’ bass ear-damage, while B-side ‘Rainmaker’ was a sweet deluge of bass, piano and thundercloud percussion. Proving it was no fluke, new single ‘Londinium’ is a bittersweet ode to the capital, treacle-thick with harmonies, singer Chrissy Van Dyke the sultriest, smokiest voice of the year bar none. This one-off date will ease the wait until they drop gorgeous debut album Prime Numbers early in July ; if ever an album was designed to soundtrack a summer, this is it. It’s a debut to rival Tricky’s Maxinquaye or Portishead’s Dummy, a soundclash of all that’s good in pulverising drum ‘n’ bass and sinister jazz. Plutonik are about to get very big indeed ; see them before they go nova. ”
(FLIPSIDE – 19th May)

Live and direct from the heart of Birmingham (?!), Plutonik are back once again to storm the record racks with their new single Londinium. Following in the wake of the huge club 12″ Jungoltrane, and the well received commercial debut, Sitting on Top of The World. Londinium continues the Brummie trio’s journey into the dark place known as drum ‘n’ bass. Gorgeous blues-drenched vocals penetrate the lilting jungle rhythms with splashes of Rhodes piano and acoustic guitar lending a lazy summer flavour. Hardcore junglists will be shocked at their pop sensibility but Plutonik are far from ashamed of their accessible new sound.
“We’re a pop band, so what ?” remarks London-born vocalist Chrissy Van Dyke. “Drum ‘n’ bass is always seen as the possession of bad boys in bubble jackets and we’re here to break that mould.”
While Londinium paints a picture of inner city sprawl, track two – entitled Bridge - deals with the serious subject of suicide in a rolling, afternoon-jazz sort of way. “Get off the bridge”, sings Chrissy in haunting tones – it’s almost as if she’s been there herself.
“There’s a strong element of songwriting in our music”, explains Chrissy. “Drum ‘n’ bass is rarely explored on this level because the vocalists are just used as an accompaniment to the rhythm. With Plutonik we’ve brought the lyrics to the forefront so it’s important for me to inject an element of personal experiences. We’ll never write fluffy love songs because it would make me sick to be that shallow”
(FLUX #13 – JULY ’99)