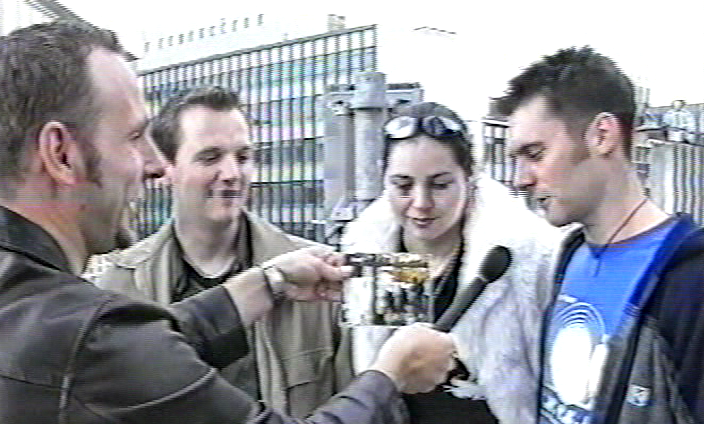 “I was bitten by a Rottweiler last night”, announces a nonplussed Alan Rowe, Plutonik’s beat alchemist and technical major-domo. “We were playing last night in Paris. When I tried to get back into the venue afterwards, the bouncers wouldn’t believe I was a member of the band. And then their fuck-off great dog bit me. It had jaws like this (stretches hands improbably wide). I would have kicked it, but, what with all the bouncers standing around, I had to just grin and bear it”.

Birmingham-based drum ‘n’ bass band Plutonik are set to release one of the most blinding debut albums of recent times. Called Prime Numbers, it follows the two sultry-as-all-hell singles, ‘Londinium’ and ‘Sitting on Top of the World’, and, in a kinder world than this, it would win the Mercury Music Prize hands down. In addition to Alan, who remixes under the nom-de-plume Octaman, Plutonik feature the liquid keyboards of the taciturn James D (“We’ve never felt the need to sample anything. We all play instruments – we just feel we can do everything better ourselves”) and what will turn out to be Plutonik’s secret weapon, the astonishingly-voiced Chrissy Van Dyke. “I was expelled from school over music. At fifteen, I had what you might call ‘a heated exchange’ with the headmaster. He asked me to leave. Since then, I’ve done just about everything. Fifteen-piece bands, rock bands, everything. When I met these guys, I was using a much harder singing style.” With this, she treats the table to a spine-scraping and mercifully brief rendition of ‘Bring Your Daughter To The Slaughter’. Enough already : she has the kind of smoky, syrupy voice that soundtracks dreams, yoked to lyrics that are at once harrowing and airy.

“Some of the songs were written years ago. ‘Londinium’, for instance, those are old lyrics.” Featuring the lines : ‘I would rather climb a tall tree than a big skyscraper / I want tomorrow’s child to see that it was not I who raped her’, it perfectly mirrors the decadent sprawl and urban decay of the capital. ‘Sitting on Top of The World’, on the other hand, is a hot-blooded ode to the joys of cybersex (‘Sitting on top of the world / I can feel you / I can touch your love’), while ‘Rehab’ is a harrowing tale of cold turkey. “That’s an intensely personal song”, says Chrissy. “It’s about that final comedown, when you lay in bed knowing that you and the drugs are over”. So it’s safe to assume that Plutonik don’t use drugs ? “They just get in the way – especially if you’re working with technology. I mean, sure, we like a smoke at the end of the night, but having seen drugs wrecking the lives of close friends, it’s just not worth it”.

The next challenge for Plutonik is to move into the live arena ; but putting together a band who can replicate the fiendish math beats of the album must be a challenge. Enter seventeen year old Nick Halstead, whose drumming prowess has astonished all who’ve seen him. “He’s going to be huge. A legend” , beams James eagerly. “When we first heard him play, we were all just blown away. The thing about drum ‘n’ bass rhythms is that they can be next to impossible to play live. He takes them in his stride. He once took an audition by playing Ed Rush and Optical. The examiners didn’t know what had hit them.”

So can we expect Plutonik to tread the boards any time soon ? “We’re playing the Scala (London) soon as part of a label night, that’s something that we’re really looking forward to. We’ve already played a few dates, in Paris and here in Birmingham.”

The reaction ? “It’s been fantastic”. That’s the other thing about Plutonik. They’re not just about well-crafted songs. They’re also about steaming up the dancefloor with beats and basslines as thick and lethal as anacondas. Plutonik are coming : be on your guard.